Kaaba measurements and the golden ratio

The small, cubic building of the Kaaba may not compete with skyscrapers for height or shortage in width, but its impact on history and humans is unparalleled. The Kaaba building is 39 feet 6 inches tall and has a total size of 627 square feet. The interior room of the Kaaba is 13 x 9 meters and its walls are one meter wide. The floor inside is 2.2 meters higher than the place where people perform the circumambulation, the ceiling and the roof are two levels made of wood. Rebuilt with teak crowned with stainless steel, all walls are made of stone. The stones inside are polished, while the external stones are polished. In this article, we will learn about the relationship of Kaaba measurements with the golden ratio.

It was built and rebuilt by the prophets Adam, Ibrahim, Ismail and Muhammad (peace be upon them all). No other building was so honored. 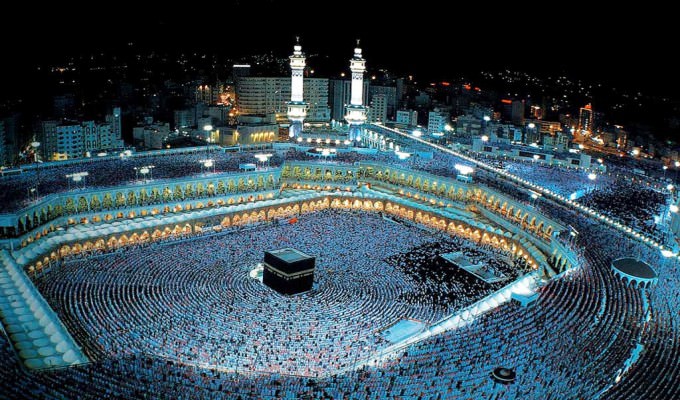 The location of the Kaaba on the globe is extremely important, as it achieves what is known as the Golden Ratio (also known as the golden section or the golden mean or the divine ratio or the Greek letter Phi) This ratio is a mathematical constant that was discovered before Christmas, and after 1597 it was calculated Accurately calculated by the German mathematician Michael Maesteln, where he found that this constant has a precise value of 1.6180339887

This ratio expresses the degree of consistency, beauty and accuracy, in simple terms as possible. The golden ratio exists when the line is divided into two parts and the longest part (a) is divided by the smallest part (b) equal to the sum of (a) + (b) divided by (a), both of which are equal 1.618.

Where it was used in the pyramids of Egypt and in the building “Parthenon”. This golden ratio is also present in every detail of the human body and various other organisms on Earth.

The Muslim opinion was that there is a divine miracle in choosing the location of the Kaaba as it achieves the golden ratio. It was very easy to ensure that the Kaaba site matched this ratio, as accurate measuring tools are available, the most famous of which are provided by Google Earth.

From the west side and the world ocean in this line is also surprisingly equal to the golden ratio of 1.618

Read also: Plants importance in the blanks for interior design

How to apply the golden ratio to your designs as an architect:

For example, take a typical 960 pixel display design and divide it by 1.618. You will get 594, which will be the height of the design. When you really think about it, one of the coolest aspects of architecture is the ability for buildings to be completely different, very diverse in size, shape and style, but very similar in essence. Regardless of who designs the building and regardless of the shape of the structure once it is finished and the end purpose of the building, the golden ratio was most likely used to determine the proportions of the difference in the buildings. Of course, not all buildings will be completely rectangular, whether natural landscape, current quantity boundaries, or personal style presupposes that the structure takes different shapes, architects need to be a means of accommodating a range of shapes, with some additional modifications to the golden rectangle, architects can easily Apply the ratio to any shape they can dream of. Unlike the golden rectangle, there are shapes that architects consider:

By taking advantage of a combination of the golden rectangle, the golden triangle, and the logarithmic spiral, architects can create a variety of shapes ranging from pentagonal to polyphonic symbols, containing 30 points and beyond. However, it is important to note that these measurements are often used as rough estimates or rules of thumbs instead of standard and rapid shapes. Practical limitations to materials, workplaces, and human calculations often make it difficult to fully determine the ratio.

Architects take the golden ratio into consideration when it is time to decide how the floor plan of a building will flow. It is used when defining features such as how to properly determine the design of buildings, put windows outside, and specify where the door should be placed in the room. While these proportions are of minor importance to the structural integrity of the building, adherence to this ratio increases the chances that people will find the building aesthetically pleasing.