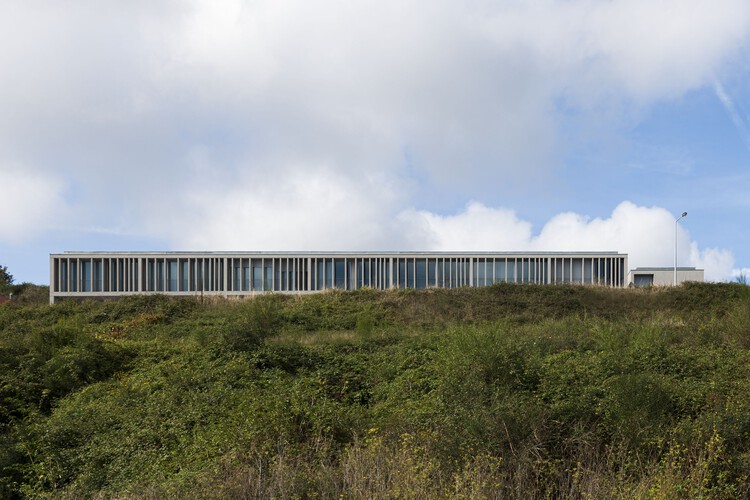 Text description provided by the architects. The Project is part of an alottment plan that previously predicted a set of seven isolated houses that would follow the existing topography. In the northern side of the site is defined by the city’s urban limit. The aim of the promoter was to maximize the interior areas of the dwellings and the usufruct of each individual exterior space assuming a particular importance of the southern views to the city valley and the Sanctuary of Bom Jesus.

Our proposal redefines this existing allotment plan by transforming the seven houses into eight units unified in a single block anchored to the topography and one single house, to the east, that adjusts to the street’s curve. The access to the housing block is possible, at the west and lower level through an exterior pedestrian gallery parallel to the street that also connects to the common car acess to the individual garages. The pedestrian gallery is also accessible, from the street, at the opposite side, to the east, via a staircase where one also finds the single direct access from the street to a unit, to the single and detached house

This option allowed us to optimize the available construction area as it fits the existing topography and grants that each individual house possesses an individual entrance, access to the common areas, an individual garage for two vehicles and, at the floor 1, an open-space defining a kitchen, dining room, with an exterior garden, and living room spatially extended by the balcony in the southern facade. The most private program of the house – the bedrooms – is reserved for the upper floor, from which we highlight the main bedroom suit, facing south, with several concrete brise soleils that operate as shadow devices. The introduction of an inner patio in this floor allowed a third bedroom; it also acts as a natural light, ventilation system and natural heating, taking advantage of the sun exposure.