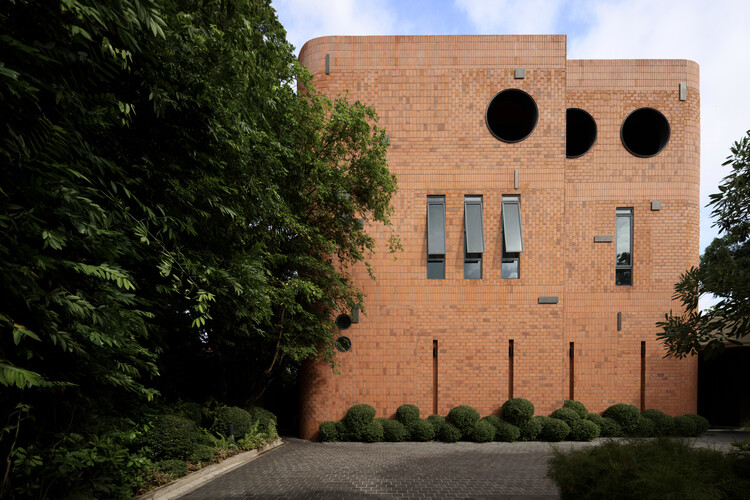 Text description provided by the architects. The Artisan House is an extension to an existing one-story house which is intended to be a private gallery for the owner’s art collection and additional space for family activities. The location of this house is part of the gated community that is made of multiple large houses next to each other. The existing house is one of the two habitations in the same plot in which they lived together with their parent.

The owner does not have the intention of making an annex look-alike an existing house but rather wants something that states different while still maintaining their privacy from the surrounding. With the obsession with art, the owner engaged the architect to create something that reflects upon that term.

Therefore, due to the limited space and requirements, the house has to be three-story with two huge facades facing in two directions. The Southeast façade faces their parent house which we mostly made of the solid wall for privacy. On the other hand, The Northwest façade is open as much as possible to an existing courtyard in the middle of the house.

The brick, a local material that is made to be used as a fundamental element in a masonry construction yet each block is different due to the production process, is perfect for the role of decorating the wall like a color on a canvas. With different brick patterns, various circle openings, and brass trim, the wall becomes the big canvas that had been filled with art statements. This wall will constantly change as material degenerated through time.

The first floor of an annex serves as a gallery exhibiting owner’s art collections connecting to an existing living room with an indoor bridge. Decorating the wall and ceiling with wood batten for a gallery interior creates a backdrop for artworks collected to be displayed while still giving space a sense of coziness. The second floor uses two children’s bedrooms each with private bathrooms linking to an existing house rooftop which will later be used as a playground. The third floor uses as fitness with a large opening through the two-layer façade making it airy, and comfortable.